When the little prince came to the second planet, he saw another strange man. He liked when people admired him.

“Ah! Another person who admires me!” said the man when he saw the little prince. 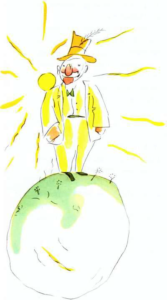 He believed that all people admired him.

“Good morning,” said the little prince. “You have a funny hat.”

“I use this hat to say good morning to people who come to visit me and admire me. Unfortunately, there aren’t many people who visit me.”

The little prince clapped his hands and the man moved his hat with a small touch.

After five minutes of this exercise the little prince started to be tired of this game.

“Do you only touch your hat or do you also take it off?” he asked.

But the man didn’t hear him. This type of people never hear anything. They hear only when somebody admires them.

“Do you really admire me very much?” he asked the little prince.

“To admire means to believe that I am the most handsome, the best dressed, the richest and the most intelligent man on the planet.”

“But you are the only man on your planet!”

“Yes, I know that I’m the only man on this planet, but please admire me.”

“I admire you,” said the little prince, “but I don’t understand why this is so important to you.”

The little prince had nothing else to do on this planet. So he decided to continue on his journey.

“Adults are very strange,” he told himself, when he was leaving this planet.

When the little prince visited the next planet, he saw a man who drank a lot.

This was a very short visit, but it made the little prince very sad. 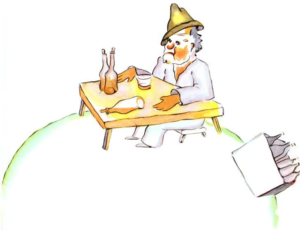 “Why are you drinking?” the little prince asked.

“I want to forget,” said the drunk man.

“To forget what?” asked the little prince.

“To forget that I feel horrible,” said the drunk man and he put his head down.

“Why do you feel horrible?” asked the little prince. He wanted to help him.

“I fell horrible because I drink so much. I know that it’s bad to drink so much!” said the drunk man. Then he stopped talking and he didn’t say another word.

The little prince left the planet.

“The adults are very, very strange,” he told himself when he continued on his journey.