The fifth planet was very interesting. It was the smallest of all. There was only space for a street lamp and a lamplighter.

The little prince couldn’t understand the reason for a street lamp and a lamplighter. There was enough light because the planet was under many stars. And there were no other people who would need a street lamp. 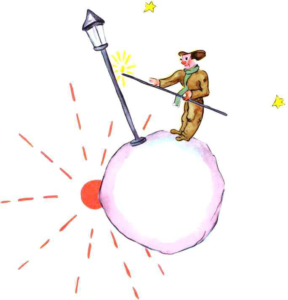 The little prince said to himself, “It’s possible that this man is strange, but he’s less strange than the king, the businessman or the drunk man. His work has some meaning.

When he turns on his lamp, it’s like a new star in the sky, or new flower. When he turns off his lamp, he sends the flower, or the star to sleep. It’s a beautiful job. And because it’s beautiful, it’s really useful.”

When the little prince arrived on the planet, he said to the lamplighter, “Good morning. Why did you just turn off your lamp?”

“The order is to turn off my street lamp. Good evening.” And he turned on his lamp again.

“But why did you turn on your lamp again?”

“That’s the order,” said the lamplighter.

“There’s nothing to understand,” said the lamplighter. “The order is the order. Good morning.”

And he turned off his lamp. Then he said, “It’s a terrible job. It was good in the past. I turned off the lamp in the morning and in the evening I turned it on again. I had all the day for myself, and at night I could sleep.”

“And is the order different now?”

“The order is the same,” said the lamplighter. “That’s the problem! Year by year the planet is turning faster and faster, and the order is still the same! Now the planet turns around every minute and I have no time to sleep. I turn on and turn off my lamp every minute.”

“It’s funny! Your day is only one minute long.”

“It’s not funny,” said the lamplighter. “Our conversation is already one month long.”

The little prince watched him and he liked more and more this lamplighter who followed the order. He wanted to help his new friend.

“I can show you how you can stop your work when you want.”

“I always want to stop my work,” said the lamplighter.

The little prince continued, “Your planet is so small that you can walk around it in three long steps. You only have to walk more slowly and you will always be in the sun. When you want to stop your work, just walk and you never have to work again.”

“How can this help me?” said the lamplighter. “The one thing which I love in life is to sleep.”

“I am,” said the lamplighter. “Good morning.” And he turned off his lamp.

The little prince continued on his journey. He said to himself, “The others, the king, the drunk man, the businessman would laugh at this man, but he is better than the others. It’s because he cares about something else, not only himself.

That man is the only one of them who could be my friend. But his planet is really too small. There is no place for two people.”