“People look at stars, but the stars mean different things to different people. For people who travel, the stars are guides. For other people they are nothing, only small lights in the sky. For scientists, they are problems. For my businessman, the stars are important because they make him rich. But all these stars are silent stars. For you, it will be different.

You will have stars like nobody else. When you look at the sky at night, there will be one star where I live. And because I will laugh on one of these stars, it will be for you as if all the stars are laughing. You will have stars which can laugh.” And he laughed again.

“When I leave, you will be sad. But you will be less and less sad evey day. Believe me, time will help you be less sad. Then you will be glad that you met me. You will always be my friend. You will want to laugh with me.

And sometimes you will open your window only for fun. And your friends will be surprised when they see you laugh when you look at the sky. Then you will say to them, ‘Yes, the stars always make me laugh!’ And they will think that you’re crazy. It’s a little trick that I will play with you.”

And he laughed again.

“It will be as if I gave you, instead of stars, a lot of little bells which can laugh.” And he laughed again.

Then he became serious again, “Tonight, don’t stay with me.”

But he was worried. He said, “I’m also asking you not to come because of the snake. He mustn’t bite you. Snakes are bad sometimes. They can bite you only for fun.”

Then he said, “It’s also true that snakes have no poison for the second bite.”

That night I didn’t see the little prince leave. He went away from me without making a sound. When I was able to catch him, he was walking fast with determination.

He only said to me, “Ah! You are here.” And he took me by the hand. But he was still worrying. 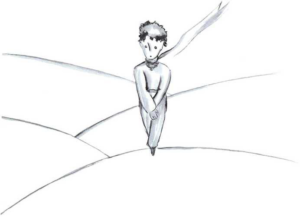 “You understand. It’s too far. I can’t take this body with me. It’s too heavy.”

“But it’ll be like an old empty shell. There is nothing sad about old shells.”

And he was silent too because he was crying.