I believe that the planet from which the little prince came is Asteroid B-612.

This asteroid was seen only once through the telescope. It was by a Turkish astronomer, in 1909. 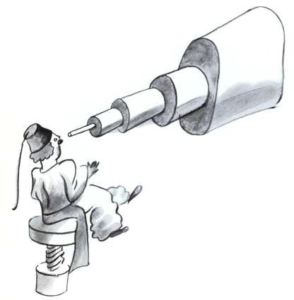 He spoke about his discovery at the International Astronomical Congress. But nobody believed him because he was wearing Turkish clothes. Adults do such things.

Fortunately for the reputation of Asteroid B-612, a Turkish leader made a law that people had to wear clothes like Europeans. The astronomer spoke about his discovery again in 1920. He was wearing very elegant clothes. And this time everybody accepted his discovery.

They ask, “How old is he? How many brothers does he have? How much does he weigh? How much money does his father make?” If they know these numbers, they think that they know this person.

If you say to the adults, “I saw a beautiful red house, with beautiful flowers in the windows and birds on the roof,” they can’t imagine the house. You have to say to them, “I saw a house that cost one hundred thousand dollars.” Then they can say, “It’s a pretty house.”

So if you say to the adults, “The little prince existed because he was nice, he laughed, and he wanted a sheep. If you want a sheep, it’s clear that you exist,” this information won’t help them. They will shake their heads, and they will think that you live in a dream. But if you tell them, “The planet he came from is Asteroid B-612,” then they will believe you. And they won’t ask you any questions.

Adults are like that. We mustn’t blame them. Children have to be very patient when they speak to adults.