This all happened six years ago. When I look at these memories, I feel sad. But I describe the little prince here, because I don’t want to forget him. It’s sad to forget a friend. Not everybody had a friend.

So that’s why I bought a box of paints and some pencils. It’s hard to start drawing, at my age, after so long time again.

I will try, of course, to make my pictures as true to life as possible. But I’m not quite sure what the result will be. One picture is alright, and another doesn’t look like what I tried to draw. I make some mistakes on the size too. Here the little prince is too tall. Here he is too short. I’m not also sure about the colour of his clothes. But I will try to do my best.

In some other details I will make mistakes too. But here you have to forgive me. It’s not my fault. My friend never explained anything to me. Maybe he thought that I was like him. But I, unfortunately, don’t know how to see the sheep through the walls of a box. Maybe it’s because I’m a little like the adults. Maybe, I’m already old.

“Is it true that sheep eat little bushes?”

I didn’t understand why it was so important that sheep ate little bushes. But the little prince added,

“So they also eat baobabs?”

I told the little prince that baobabs aren’t little bushes. The baobabs are right the opposite. They are trees as large as churches. And that even if he took nine big elephants back to his planet, those elephants couldn’t eat one single baobab.

The idea of ​​nine elephants made the little prince laugh, “They would have to stand on each other.” 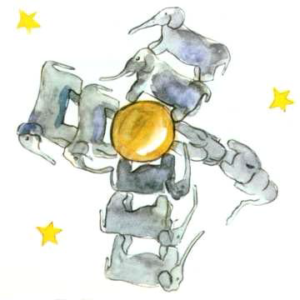 But he said something clever, “The baobabs, before they grow so big, they’re very small at the beginning.”

“That’s right,” I said. “But why is it important that your sheep eats the little baobabs?”

He said, “Oh, come on! You know,” as if we were talking about something clear and simple. And then I had to use my intelligence to solve the problem, without any assistance.