The first one was inhabited by a king. The king was wearing royal clothes. He was sitting on a simple but majestic throne. 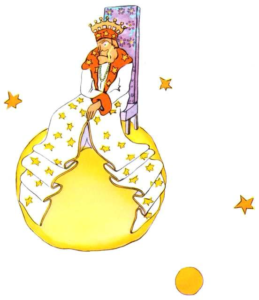 “Ah! Here is a visitor,” the king said when he saw the little prince.

And the little prince asked himself, “How can he know who I am? He’s never seen me before.”

“Come closer to me. I want to see you better,” said the king. He was very proud to be a king for someone at last.

The little prince looked around for a place to sit down, but the planet was covered by the magnificent clothes of the king. So he remained standing. And because he was tired, he yawned.

“It’s a violation of etiquette to yawn in the presence of a king,” the king told him. “I forbid you to do so.”

“I can’t help it,” replied the little prince, quite embarrassed. “I’ve made a long journey, and I haven’t had any sleep.”

“Then I order you to yawn,” said the king, “I haven’t seen anyone yawn for years. For me yawns are a curiosity. Come on! Yawn again! It’s an order.”

“That scares me. I can’t do it now,” said the little prince, turning red.

“Oh, well!” the king replied, “Then I order you to yawn sometimes and then to…” He was confused a little and he looked annoyed because the king always insisted that his orders would be respected. He wouldn’t tolerate if somebody didn’t follow his orders. But, because he was a very good man, all his orders were reasonable.

“May I sit down?” the little prince asked quietly.

“I order you to sit down,” the king replied. And he pulled a piece of his clothes so that there was some space for the little prince to sit down.

But the little prince was thinking about one thing. The planet was very small. The king didn’t control a big area.

“Sir,” said the little prince, “Can I ask you a question?”

“I order you to ask me a question,” the king said.

“Sir, what do you control?”

“I control everything,” said the king.

The king pointed to his planet, then to the other planets, and all the stars.

“Are you the king of all that?” asked the little prince.

“And do the stars do what you want?”

“Of course,” said the king. “They do it immediately. They do what I want them to do.”