Then the fox appeared. 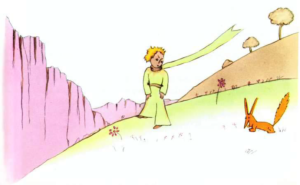 “Good morning,” the little prince replied politely. “Who are you? You’re very pretty.”

“Play with me,” the little prince proposed, “I’m so sad.”

“Ah! I’m sorry,” said the little prince. But after some thought, he added, “What does tamed mean?”

“You’re not from here,” said the fox. “What are you looking for?”

“I’m looking for people,” said the little prince. “What does tamed mean?”

“People,” said the fox, “have guns and they hunt. It’s a problem for me. They also keep chickens. That’s the only interesting thing about them. Are you looking for chickens?”

“No,” said the little prince. “I’m looking for friends. What does tamed mean?”

“It means to create ties.”

“That’s right,” the fox said. “For me you’re only a little boy, just like a hundred thousand other little boys. And I don’t need you. And you don’t need me either. For you I’m only a fox like a hundred thousand other foxes. But if you tame me, we’ll need each other. You’ll be the only boy in the world for me. I’ll be the only fox in the world for you.”

“I’m beginning to understand,” the little prince said. “There’s a flower. I think she has tamed me.”

“It’s possible,” said the fox. “On Earth we can see all sorts of things.”

“Oh, my flower is not on Earth,” the little prince said.

The fox seemed quite fascinated. “On another planet?”

“Are there hunters on that planet?” 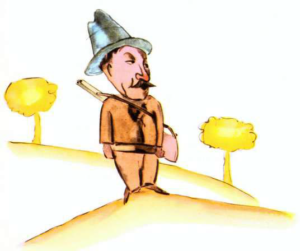 “Nothing is perfect,” sighed the fox. But he came back to his idea. “My life is pretty much the same every day. I hunt chickens. Men hunt me. All the chickens are similar, and all the men are similar. So, I’m a little bored.

But if you tame me, my life will be filled with sunshine. I’ll know the sound of footsteps that will be different from all the others. The other footsteps will send me back underground. Yours will call me out of hiding like music. And then, look! Do you see the corn fields over there? I don’t eat bread. For me corn is not useful. The corn fields say nothing to me. And that’s sad.

But you have golden hair. I think it would be wonderful if you tamed me. The corn which is also golden will remind me of you. And I’ll love the sound of the wind in the corn.”

The fox became silent and looked at the little prince for a long time. “Please, tame me!” he said.

“I’d like to tame you,” replied the little prince. “But I don’t have much time. I want to find friends and learn new things.”

“We only learn about things which we tame,” said the fox. “People don’t have time to learn anything. They buy things from shops. But because there are no shops where you can buy friends, people don’t have friends any more. If you want a friend, tame me!”

“What do I have to do to tame you?” asked the little prince.

“You have to be very patient,” replied the fox. “First, you’ll sit down at a little distance from me, over there in the grass. I’ll watch you with one eye and you won’t say anything. Words are the source of misunderstanding. But every day you’ll be able to sit a little closer.”