The first night I fell asleep on the sand a thousand miles from any land with people. I was more isolated than a sailor on a raft in the middle of the ocean. So you can imagine my surprise when a funny little voice woke me up in the morning. It said, “Please, draw me a sheep!”

I jumped to my feet as if I was hit by lightning. I rubbed my eyes. I looked around. And I saw a very unusual little man who was looking at me very seriously. This is the best picture which I later managed to make of him.

But my drawing, of course, is much less fascinating than the original model. It’s not my fault. I was discouraged in my career as a painter by the adults at the age of six. And I never learnt to draw anything, except snakes from the outside and snakes from the inside.

When I finally managed to speak, I said to him, “What are you doing here?”

He repeated, very slowly and very seriously, “Please draw me a sheep.”

The whole situation was very strange but I took a sheet of paper and a pen out of my pocket. But then I remembered that I mostly studied geography, history, maths and grammar, and I told the little man that I did not know how to draw.

He replied, “It doesn’t matter. Draw me a sheep.”

“But I have never drawn a sheep. How can I draw one now?” I thought to myself. So I drew him one of two drawings which I was able to draw. It was a big snake from the outside. And I was shocked to hear the little man reply, “No, no, no! I don’t want an elephant inside a big snake. A big snake is a very dangerous creature, and an elephant takes a lot of space. Where I live, everything is very small. I need a sheep. Draw me a sheep.”

So then I made a drawing. 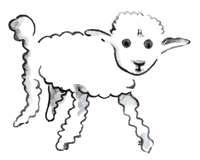 He looked at it carefully, then he said, “No. This sheep is already very ill. Make me another.”

So I made another drawing. 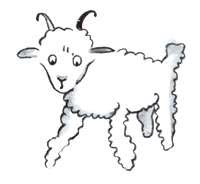 My friend smiled gently at me, “You have to see it too. This isn’t a sheep. It’s a ram. It has horns.”

So then I made another drawing. 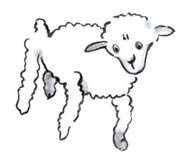 But it was rejected too, just like the others.

“This one is too old. I want a sheep who will live a long time.”

Then, for lack of patience, because I was in a hurry to start repairing my engine, I quickly drew this drawing. 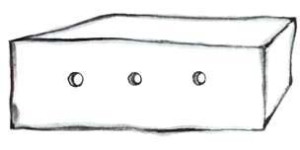 And I said, “That’s a box. The sheep you want is inside.”

I was very surprised to see the face of my young judge get lighter, “That’s exactly how I wanted it! Do you think the sheep will need a lot of grass?“

“Because where I live, everything is very small.”

„There will surely be enough grass for it. I gave you a very small sheep.“

He bent his head over the drawing, “Not so small. Look! The sheep has gone to sleep.”

And that is how I met the little prince.