The next day the little prince returned.

“It would be better to return at the same hour,” said the fox. “If you come, for example, at four in the afternoon, then at three I’ll begin to be happy. I’ll feel happier and happier, the closer it is to four. At four I’ll be very excited. I will show you how happy I am.

But if you come at any time, I’ll never know at what time my heart should be ready to look forward to you. There have to be some rules.” 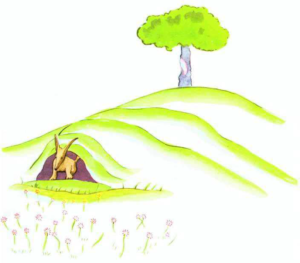 “The rules are important. They make one day different from other days, one hour from other hours. For example, hunters have their rules too. They dance with the village girls every Thursday. So Thursday is a wonderful day. I can walk into the village easily. If the hunters danced at any time, the days would all be the same for me, and I would have no holiday.”

So the little prince tamed the fox. And when the hour of his departure was near, the fox said, “Ah! I’m sad. I will cry.”

“It’s your fault,” said the little prince, “I never wanted to do you any harm, but you wanted me to tame you.”

“Then you get nothing out of it!”

“I get something,” said the fox, “because of the colour of the corn.”

Then he added, “Go and look again at the roses. You’ll understand now that yours is unique in all the world. Then come back to say goodbye to me, and I’ll give you a present. The present will be a secret.

The little prince went to look at the roses again.

“You’re not at all like my rose. You’re nothing at all yet,” he told them. “No one has tamed you and you haven’t tamed anyone. You’re like my fox was when I first met him. He was only a fox like a hundred thousand others. But I made him my friend, and now he’s unique in all the world.”

And the roses were very embarrassed.

“You’re lovely, but you are empty,” he continued. “Nobody would die for you. Of course, to somebody who just passed by, my rose would look just like you. But my rose all alone is more important than all the hundreds of other roses because she’s the one that I watered. She’s the one that I put under glass. For her I killed the caterpillars, except two or three that we saved to become butterflies. Because she’s the one I listened to when she complained, or when she was proud, or when she said nothing. Because she is my rose.”

And he returned to the fox.

“Goodbye,” said the fox. “Here is my secret. It’s quite simple. You can see clearly only with the heart. What is essential is invisible to the eyes.”

“What is essential is invisible to the eyes,” repeated the little prince, in order to remember.

“It’s the time you spent with your rose that makes your rose so important.”

“It’s the time I spent with my rose…” said the little prince, in order to remember.

“People have forgotten this truth,” said the fox. “But you mustn’t forget it. You become responsible, forever, for what you’ve tamed. You’re responsible for your rose.”

“I’m responsible for my rose,” the little prince repeated, in order to remember.

Then he left the fox.