“What makes the desert beautiful,“ said the little prince, “is that it hides a well somewhere.”

I was surprised to suddenly understand this mysterious shine of the sand. When I was a little boy, I lived in an old house. There was a legend that it had a treasure buried somewhere. Of course, no one was ever able to find the treasure. Maybe, no one even searched. But that treasure made the house special. My home was hiding a secret deep in its heart.”

“Yes,” I said to the little prince, “whether it’s a house or the stars or the desert, what makes them beautiful, is invisible!”

When the little prince fell asleep, I took him in my arms and I started walking again. I was moved. It seemed to me that I was carrying a fragile treasure. It even seemed to me that there was nothing more fragile on Earth. In the light of the moon, I looked at his pale face, his closed eyes, his golden hair that moved in the wind, and I said to myself, “What I see here is only a shell. What is most important is invisible.”

And as his lips opened slightly with a little smile, I said to myself again, “What moves me so deeply about this sleeping little prince is his loyalty to a flower. It is as if I could see the image of a rose that shines through him like a flame in a lamp, even when he sleeps.”

And I realized that he was even more fragile than I thought. I felt I had to protect this light. The wind could blow it out.

We continued walking like that and, at dawn, we found the well.

The little prince woke up and he said, “People get on their express trains, but they don’t know what they are looking for. Then they get excited and hurry around in circles. It’s not worth the trouble.”

“It’s strange,” I said to the little prince, “everything is ready, the bucket, the rope.”

He laughed, he took the rope, and let the bucket go down the well. As the bucket went down, we heard some interesting sounds.

“Can you hear it?” said the little prince. “We have woken up the well and it’s singing.” 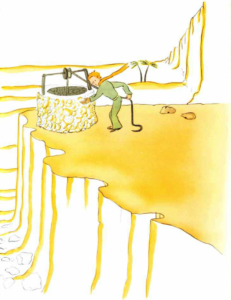