So it came to me that on the planet where the little prince lived, there were, as on all planets, good plants and bad plants. Therefore there were good seeds of good plants and bad seeds of bad plants. But the seeds are invisible. They sleep deep in the ground until one of them has the desire to wake up. Then it stretches, and it begins, first with a bit of shyness, to grow toward the sun.

When it’s very small, you don’t know if it is a carrot seed or a rose seed. And you can let it grow as it wants. But if it is a bad plant, it is necessary to destroy the plant immediately, as soon as you can recognize it.

And the truth was that there were some terrible seeds on the planet of the little prince. These were the seeds of baobabs. The soil of the planet was full of them. If you recognize a baobab too late, you will never be able to get rid of it. It spreads over the entire planet. Its roots go right through it. And if the planet is too small, and if the baobabs are too many, they tear the planet apart. 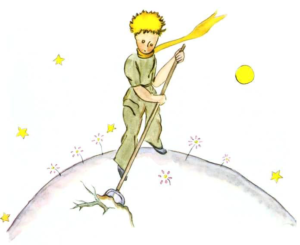 “It’s a question of discipline,” the little prince later told me.

“When you finish washing and dressing each morning, then it’s time to clean your planet very carefully. It’s necessary to pull up the baobabs regularly, as soon as you can recognize them. Sometimes it isn’t easy because they are similar to roses when they are very young. It’s a very boring job, but very easy.”

And one day he said to me, “You should make a beautiful drawing that would show all this to the children where you live. That information would be useful to them if they travel one day.

It’s sometimes OK to leave your work for later. But when you do it with baobabs, it’s always a catastrophe.

I knew a planet that was inhabited by a lazy man. He forgot to pull up three little bushes.”

And, as the little prince described it to me, I drew this planet.

I don’t want to be a moralist. But the danger of baobabs is so little known. There is a great possibility that if you get lost on an asteroid, you will meet such danger. Now I am going to tell you what you must do. I will say it in simple words.

“Children, watch out for baobabs!”

I worked so hard on this drawing because I wanted to warn my friends of a danger that they didn’t pay attention to for a long time. The lesson I am teaching is worth all the hard work.

You may ask yourself, “Why are there no other drawings in this book as big as the drawing of the baobabs?”

The answer is very simple. I have tried but I couldn’t succeed. When I drew the baobabs, I was so driven by the force of great urgency to give you the message. 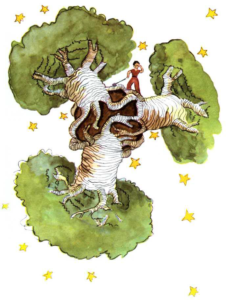