The little prince again disturbed my thoughts, “And you actually believe that the flowers have thorns just to make others upset?”

“No! Not at all. I don’t believe anything! I answered you with the first thing that came to my mind. I am busy with serious things!”

He looked at me shocked.

He saw me with my dirty hands, trying to do something with the engine, an object that seemed extremely ugly to him.

That made me a little ashamed. But then, with the same tone in his voice, he continued, “You confuse everything. You mix everything together!”

He was really angry. He shook his golden hair in the wind.

The little prince was now white with anger.

“Flowers have been growing thorns for millions of years. For millions of years, sheep have been eating them. And you think that it’s not serious to try to understand why flowers go to so much trouble to grow thorns that are never used for anything? Is the war between the sheep and the flowers not important? Is this not more serious and more important than the counting of the gentleman with a red face?

I have a flower. The flower is unique in the world. She exists nowhere, except on my planet. It is a flower that a little sheep can destroy in a single bite one morning. And the sheep may not even realize what it is doing. And you think that this is not important?”

His face turned from white to red and he continued.

“If someone loves a flower that exists only one among all the millions and millions of stars, that’s enough for this person to be happy when he looks at the stars and he says to himself, ‘My flower is somewhere up there.’ But if the sheep eats the flower, then for him it’s as if suddenly, all the stars were gone. And you think that’s not important?”

He couldn’t say another word. He suddenly started to cry. The night came. I let my tools drop from my hands. How important could my tools, my engine, my thirst or death be now? On one star, on one planet, on my planet, the Earth, there was a little prince who needed my attention. I took him in my arms. I held him gently. I said to him, “The flower you love is not in danger. I will draw you something to protect your flower. I will draw you a fence you can put around you flower. I will…”

I didn’t know what to say to him. I felt uncomfortable. I didn’t know how to talk to him, where to join him again. It’s so mysterious, the land of tears. 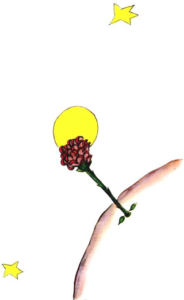