I soon learnt more about the flower. On the little prince’s planet the flowers were always very simple. They were small and they didn’t disturb anyone. They appeared in the grass in the morning, and they were peacefully gone by night. But it all changed one day.

From a seed brought from nobody knew where, a new flower started to grow. First, the flower was very small. The little prince watched her very closely. The flower wasn’t like any other small flowers on his planet.

The flower could be a new kind of baobab. But she soon stopped growing, and she began to prepare for opening. The preparation for this moment took a long time. The flower didn’t want to show her colours immediately. The preparation lasted days and days. Then one morning, exactly at sunrise, the flower showed herself.

And after all her preparation for this moment, she yawned and said, “Ah! I am hardly awake. Please, excuse me. It will take some time before I am perfect.” 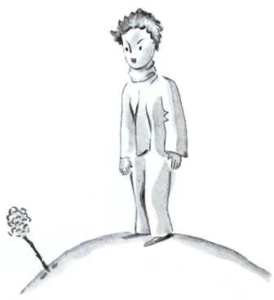 But the little prince couldn’t hide his admiration, “Oh! How beautiful you are!”

“Yes, I am. Look at me,” the flower replied softly. “And I was born at the same moment as the sun.”

The little prince realized that she wasn’t too modest, but she was so beautiful.

“I think it’s time for breakfast,” she soon added, “Would you be so kind and water me?”

And the little prince, surprised by the whole situation, started to look for a can of fresh water. After finding it, he served the flower. 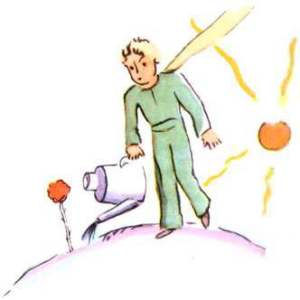 Soon, she began playing with the little prince in a way that wasn’t always pleasant.

One day, for example, when she was speaking about her four thorns, she said to the little prince, “I’m ready for tigers with all their claws.” 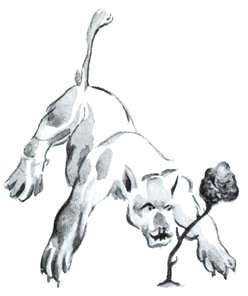 “There are no tigers on my planet,” the little prince objected, “And besides tigers don’t eat grass.”

“I’m not a grass,” the flower sweetly replied, “I’m not at all afraid of tigers, but I’m afraid of drafts. Do you have something to protect me from drafts?”

“It isn’t good for a plant to be afraid of drafts,” said the little prince, and he added to himself, “This flower is very complicated.”

“At night I want you to put me under glass. It’s very cold here where you live. It’s quite uncomfortable. Where I come from…”

But she interrupted herself at that point. She came here as a seed. She couldn’t have known anything about other worlds. She was embarrassed because she let herself be caught at preparing such a naive lie. She quickly coughed two or three times, in order to make the little prince feel bad.

“The glass? I was just going to look for it but you were speaking to me,” said the little prince.

Then the flower started to cough a little more so that the little prince would feel bad again.

So the little prince, in spite of all the good will that came from his heart, soon started to mistrust her. He took seriously when somebody used words which were without importance, and it made him very unhappy. 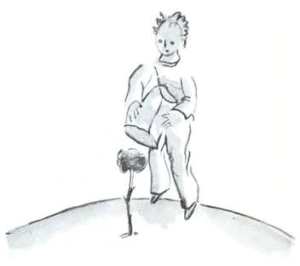